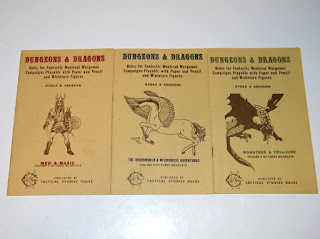 When I haven't been working on my Star Wars White Star Campaign, I've been picking away at the original little books for D&D. I've been doing this for two main reasons. First, I want to learn more about this history of the game and this is the seminal rule set. Secondly, I want to figure out the best possible rule set for me and my players and Original Dungeons and Dragons has the fewest rules of all the editions. Since my players are not rules-minded people and I only have so much mental bandwidth I can devote to knowing all the rules for the game, OD&D seems like the best place to start.

You may have heard that the OD&D rules are hard to grasp at first. That they have terrible organization and make certain assumptions about the players and their knowledge of tabletop gaming, specifically with wargaming. This is all true, but I've found that the rules are not that hard to comprehend if you have the right guidance. After about a week of reading the rules and reading commentary on the rules, I am confident I could run a very successful game using only the rules as they appear in the three little books. He's what I used to get here.

First, download the original books from RPGNow. At least read the first book, Men and Magic, strait through. Don't look for explanations cheat sheets right away. The book is the size of the average zine, so you won't be in the woods for long.

Next, read Philotomy's Musings as a commentary to the original books. This will give you valuable insight into how the game is run using those weird, bare-boned rules. The author does a great job of addressing most every rule and explaining what Arneson and Gygax were thinking and why those rules work at the table.

Once you've done this, you can read through the free version of Swords & Wizardry Whitebox. This is not a true retroclone of the first set of rules as there are several key differences, but it's pretty close and you can easily see how all those rules spread out across Men and Magic would work together with better organization. You may also be more interested in this version of the rules after spending some time with OD&D.

I was planning on making a document that was just the rules from Men and Magic with better organization, but now I think that piecing together the rules for oneself is a valuable rite of passage. It has certainly helped me come to terms with how few rules D&D needs to still feel like D&D and it has strengthen my idea of what My D&D Game is like.
Posted by Unknown at 1:10 PM