My Predictions for the RPG World in 2015

- Roleplaying games in general will see an uptick in popularity as more and more TV shows have D&D episodes and Wil Wheaton's RPG YouTube show starts. They will especially grow more popular among women.

- Wizards of the Coast will announce the sale of 5e PDFs late in the year. The prices will frustrate anyone who has already purchased the physical books.

- WotC won't release very many new D&D books but there will be a new Forgotten Realms setting book and it will be praised for being the best version of the Realms yet.

- Likewise, Project Morningstar will non-existent by the end of the year.

- Lamentations of the Flame Princess will release (almost) all of the many miscellaneous adventures from all those crowd-funding projects. Probably all at once along with the Referee Book.

- The RPG clique war will be quiet for most of the year. There won't be any major controversies. More and more people learn to co-exist.

- The line between storygames and D&D will blur to the point of irrelevance.

- The inevitable Unknown Armies 3e Kickstarter will be a huge success. Things get really crazy while post-modern conspiracy and chaos magick becomes the flavor of the month.

- There will be another huge Reaper Kickstarter. It's a massive success but somehow puts Reaper out of business. No one gets their Bones 2 packages as a result.

- DC Heroes will see a resurgence in popularity.
Posted by Unknown at 4:55 PM No comments:

Email ThisBlogThis!Share to TwitterShare to FacebookShare to Pinterest
Labels: Opinion 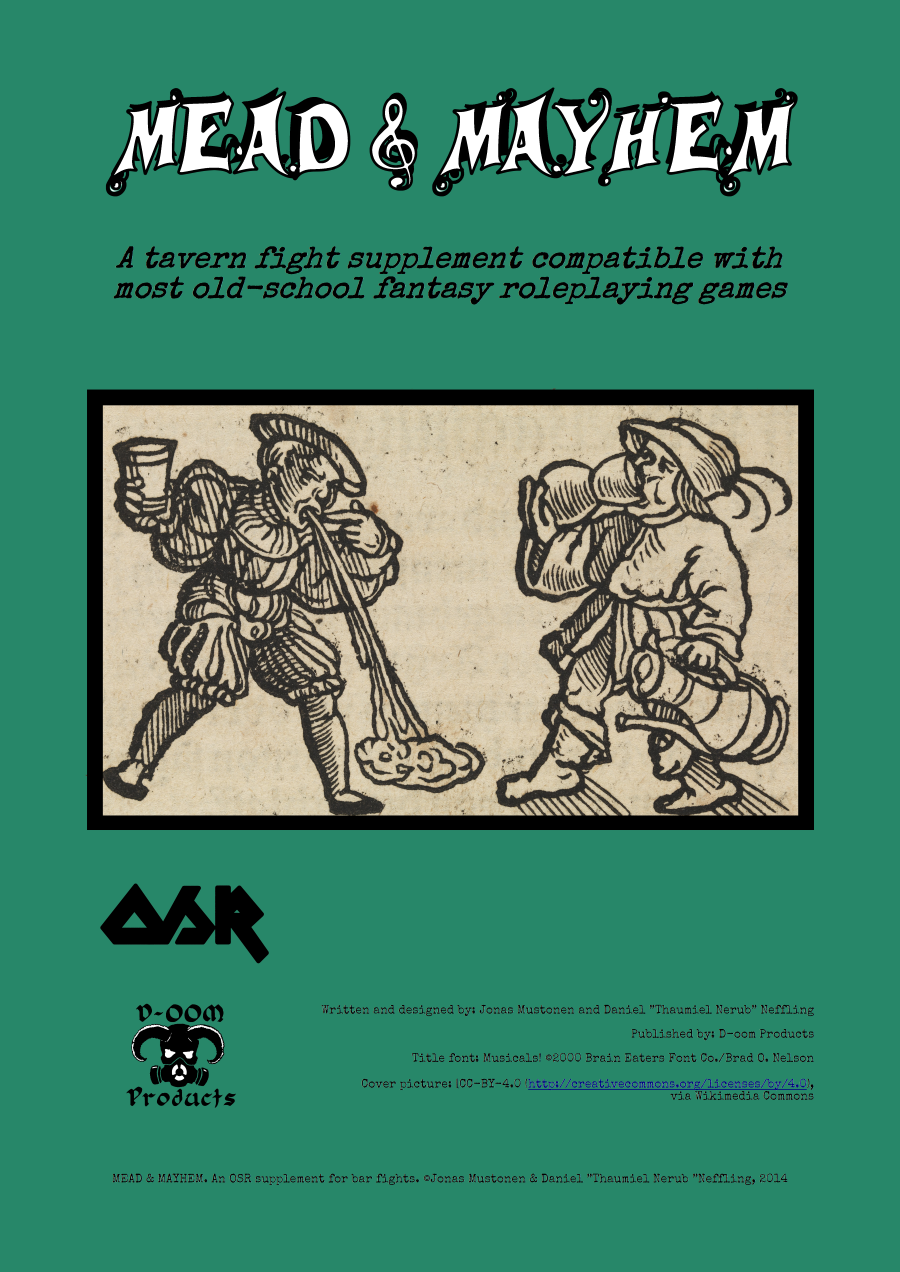 Mead & Mayhem is a small supplement for OSR roleplaying games (although it could easily work for any medieval fantasy game) that sets out to power raucous and unruly tavern brawls. The biggest chunk of the supplement is a big d30 table that keeps escalating the chaos of the bar fight to catastrophic levels. The table actually has 40 results, the highest of which can only possibly be reached after the brawl has been going on for a while and the accumulative bonuses to the rolls has escalated things out of control.

Here is a sample of how one such fight goes down:

Things kick off when some rowdy dwarves smash up a barrel of beer to fill their flagons, resulting in the floor becoming slippery. Punches begin the fly as people slide into each other. Suddenly, a group of adventurers burst out of the wine cellar (which I guess is attached to a dungeon). They enter the melee, already in murderhobo-mode.  As the brawl gets more and more out of control, someone begins shouting out accusations of theft and assault at the tavern's owner, adding paranoia to the mix of heated emotions. Seizing on the opportunity, members of the local thieves' guild begin to nick the coin purses of anyone distracted by the bar fight. And finally, as if summoned by the drunken brawl, a coven of witches dance nude on the tavern's roof, drawing a crowd to the building.

At this point I think I would stop, because a coven of naked witches seems like an excellent set of antagonists, but I could continue rolling on the table, which will likely result in the complete destruction of the tavern itself.

Also included in Mead & Mayhem are guidelines for combat in a bar fight and a playlist of recommended fight songs.

Although it is a small supplements at only five pages, Mead & Mayhem does its job well in making the tavern fight an actual interesting prospect for the DM. Before reading this I would have problem run any bar fight my players instigated as a straight-forward combat encounter or simply have their opponent lay them out because fighting yokels in a bar is boring and a waste of time. Not any more.

Pair Mead & Mayhem with the Brewhouses of Vornpathium and you can run an entire session around one crazy night at the bar.

One thing that should be noted is that, as far I know, English is not the native language of either of the authors. As a result there are many grammatical errors and awkward wording. While pervasive, these errors do not get in the way of the functionality of the supplement. I have already sent a list of suggested edits to the authors and they have said that an update will be uploaded eventually.

Mead & Mayhem is currently Pay-What-You-Want on RPGNow. Grab it now and toss a few bucks to the authors.
Posted by Unknown at 8:24 AM No comments: